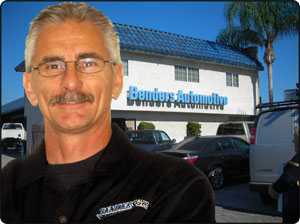 Richard Bender came to California in 1962 with his family and started working for Bear Frame & Wheel as an alignment tech.  Soon after, he started working at Russ Davis Ford, which is now Clippenger Ford. There, he did suspension, frame and alignment work and eventually established quite a reputation for his quality work and expertise on suspensions.

He also invented several components to repair some of the early suspension problems Ford had. In 1965 Ford Motor Company employed him to do all the suspension work on Ford sponsored Pro Stock Mustangs. In 1967 Richard was ask to teach at Citrus Community College and taught for 11 years.  After about 4 years working for Ford, Richard decided it was time to start up his own business. In 1972 Benders Wheel Alignment began. 35 years later we are still here in the same location doing the same high quality work.

In 1998, Richard retired and turned the shop over to his son, Tom.  Tom has been working in the shop since he was in High School and has always been passionate about auto repair and restoration.

He has been involved in the local automotive community for many years.  Tom was an instructor and integral part of the Citrus College’s Automotive Department for 12 years.  His restoration work was featured in a national magazine.  Tom is an ASE Certified Technician.

Bender’s Automotive repair in Covina is a general auto repair facility that provides everything from routine maintenance to extensive auto repairs and diagnosis.  Additionally, the company has it’s own machine shop for its own use and for other auto repair facilities.  The company also specializes in auto restoration, customization and Hot Rods.

We are still open!

We understand that COVID-19 is a very serious matter and we have taken all health precautions.

Bender's Automotive is still open and available to assist you with your automotive needs.

Our customers health and safety is our highest priority!